Off to a different part of Patagonia, this time in Chile! The main reason we came to Puerto Natales was to see one of Chiles most famous national parks, Torres del Paine, and Puerto Natales is a good starting point. We took a relatively short bus ride from El Calafate into the small town of Puerto Natales. Our first bus ride crossing international borders was actually pretty uneventful, as it should be. We had to all get off the bus a couple times to get our passports stamped and get luggage scanned but before we knew it, we were pulling into town.

We stayed in a hostel called El Sendero, which was definitely a few notches up from our last one in El Chaltén (as far as looks go). It was really cozy and cabin-like, a stark contrast with the cold weather outside. This will be the closest town to the southern tip of the continent that we will be exploring and we could definitely feel the icy quality of the air. Every morning we had a delicious breakfast waiting for us in the very spacious kitchen. It was a great place to stay! 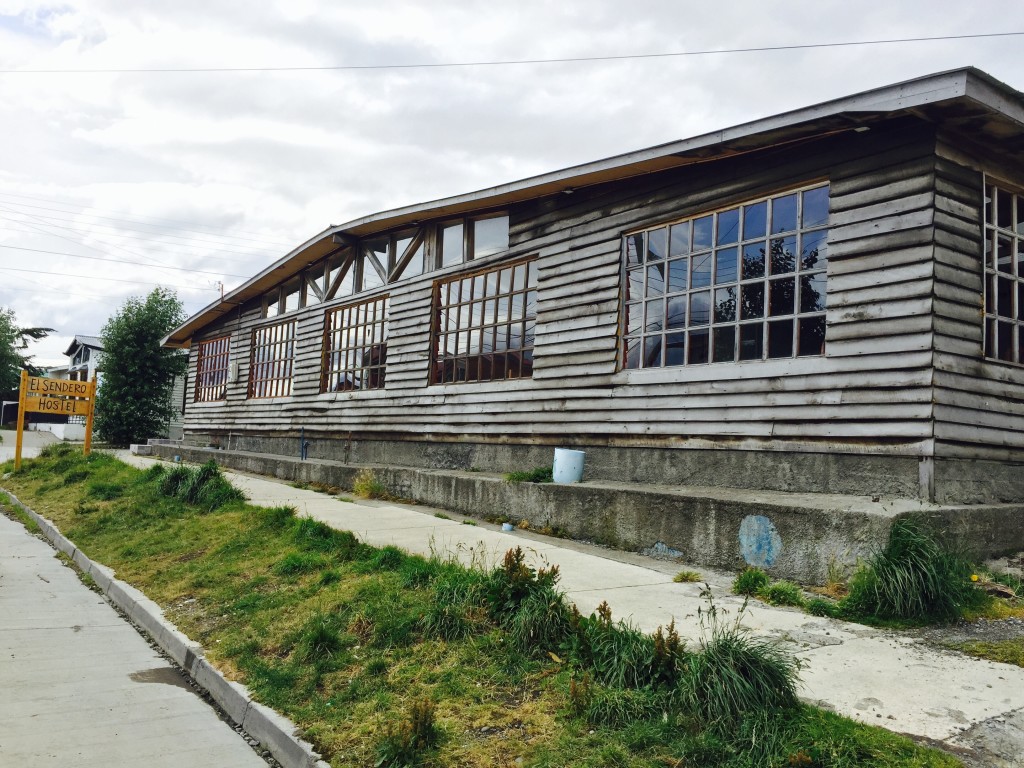 Our first day we spent wandering around the port town. It was a little overcast but we could still see the dramatic backdrop of the snow peaked Andes – it really felt as if we were nearing the southern tip of the world. There were many boats scattered around the port, all in different states – in and out of the water, some being used for work, some for pleasure and some being refurbished. Many of them were full of color and life and some were just lifeless, shells of what they used to be. 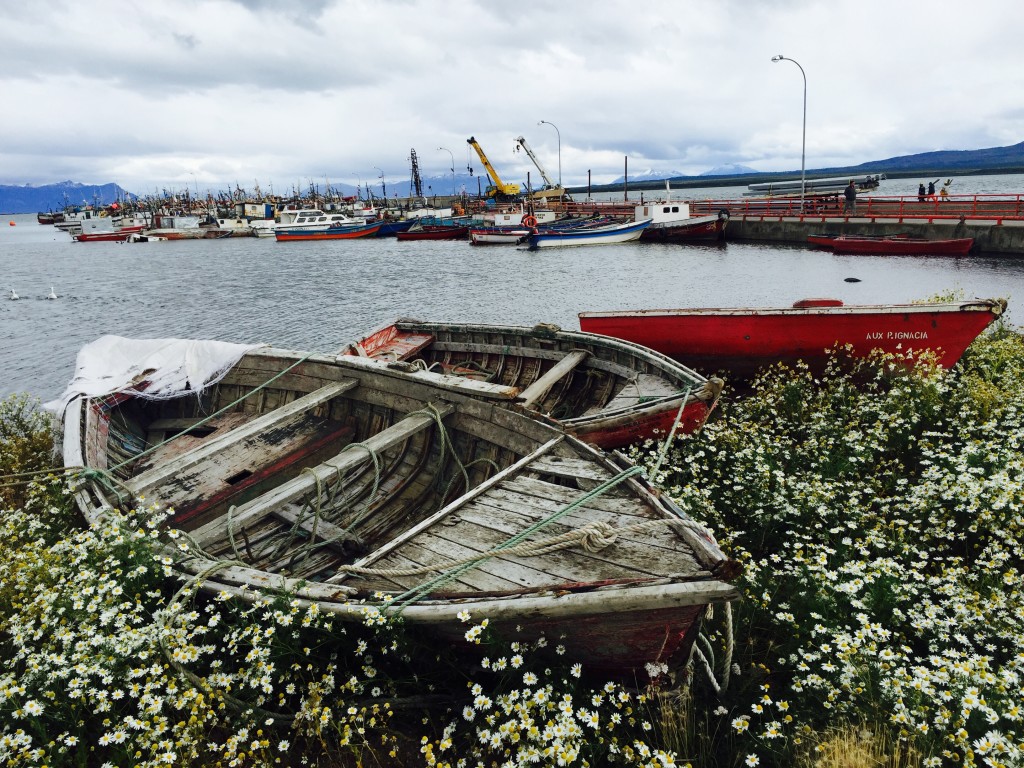 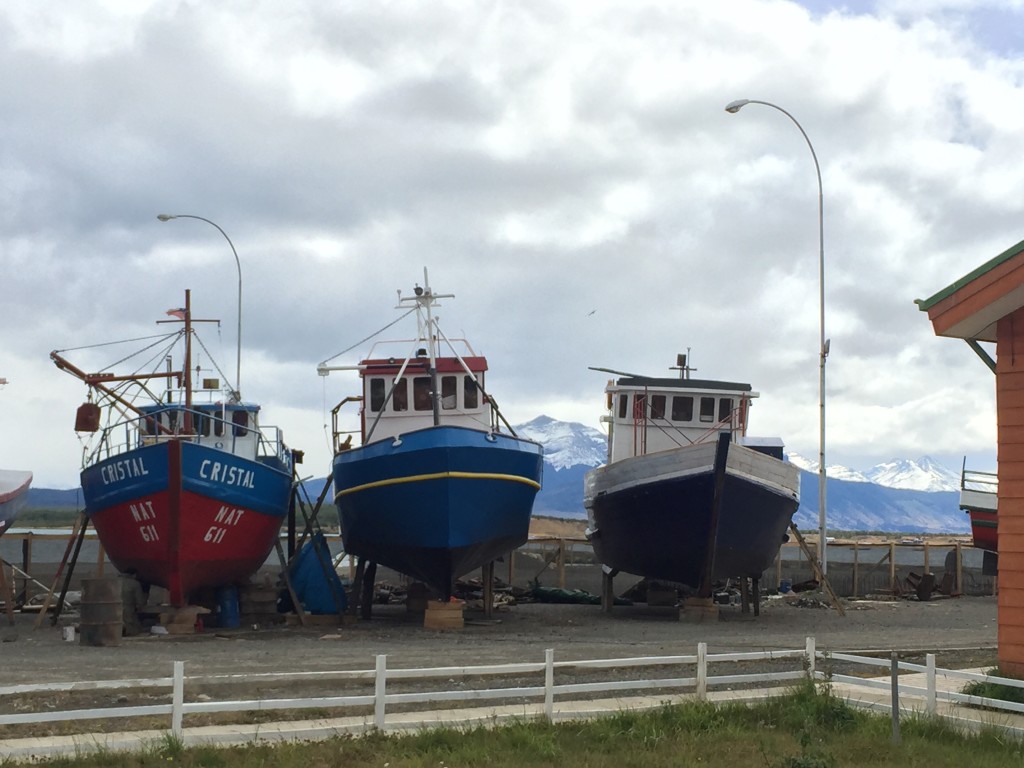 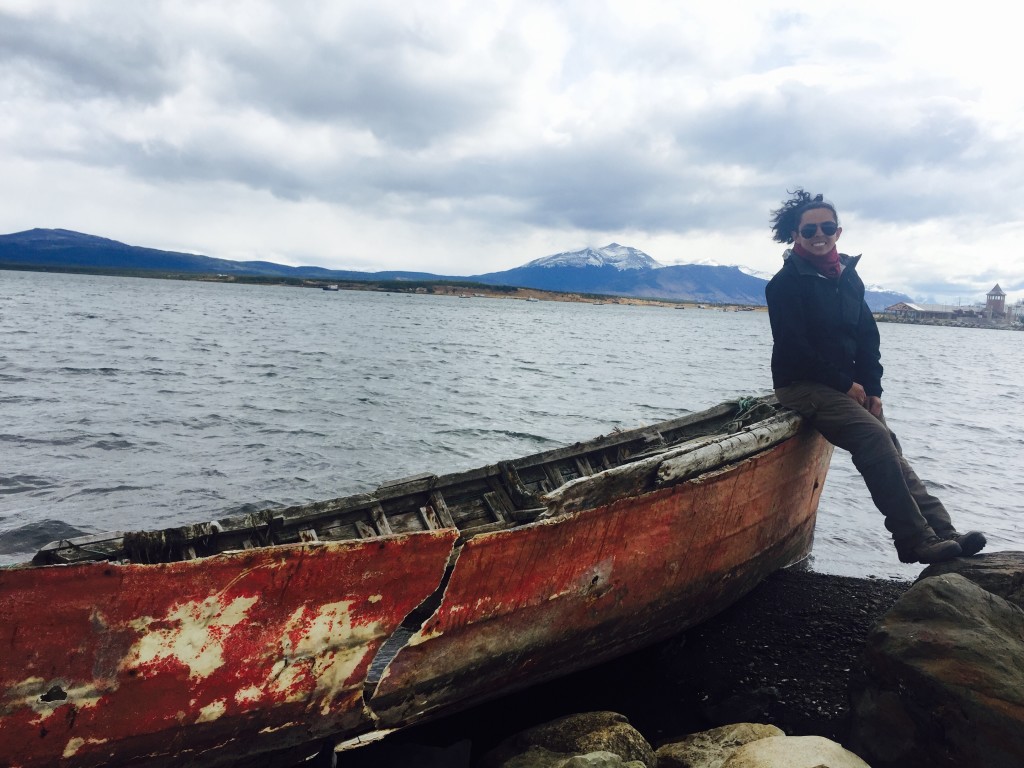 Since we were going to be there for only a day or so, we decided a guided tour through the national park would suffice. They would basically take us through the main points of interest in the park – yes, it was one of those hop on/hop off lazy people tours. We wanted to see the whole park and there was just no way to do it any other way.

The bus picked us up at 8:00 AM and it was a full one! Our guide, Gabriela did an exceptional job of keeping us entertained whilst providing us with pertinent information about the national park.

The first of many stops was the Cueva de Milodon (Mylodon Cave). This cave was first discovered around 1895 by a German guy who stumbled upon some remains of a giant sloth-like animal called a Mylodon, which in fact had already been discovered earlier by some dude named Darwin. They are said to have lived approx 10,000-13,000 years ago! Pretty neat! 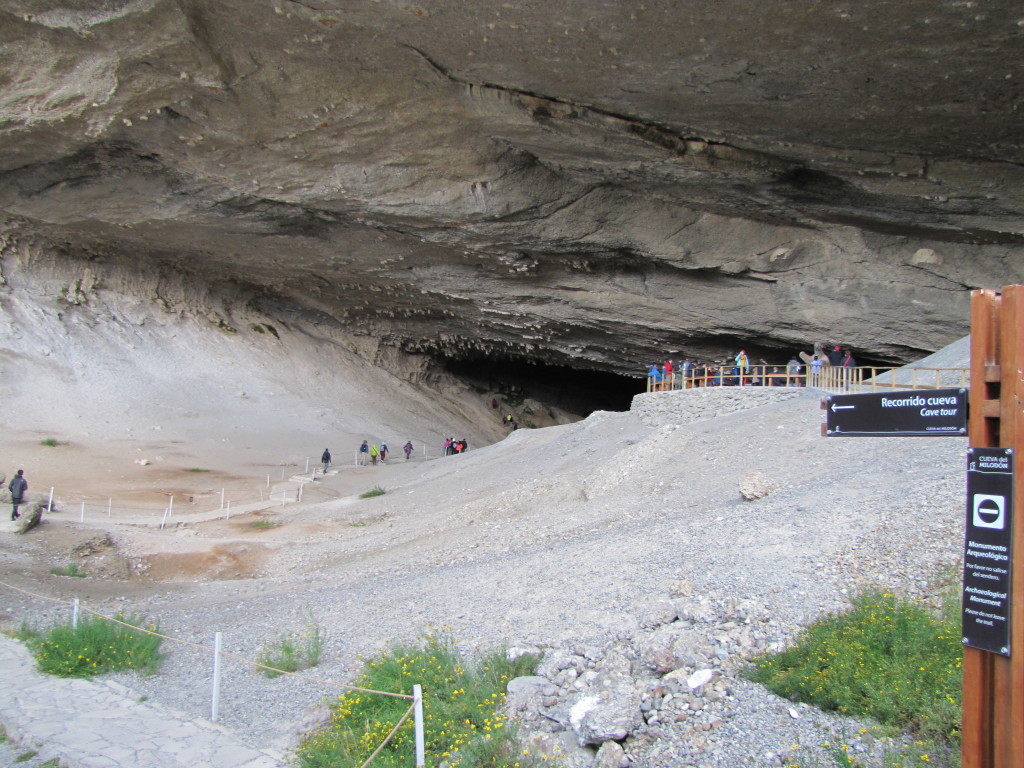 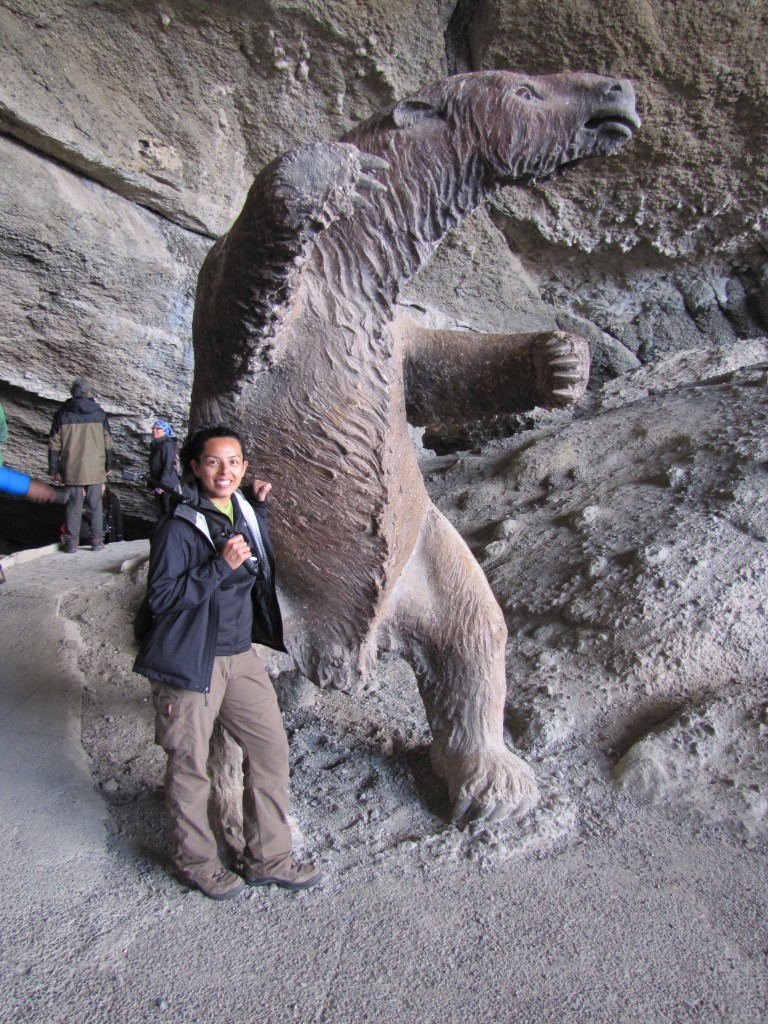 Jen posing with the life-sized milodon

From here, we started heading towards the park and on the way encountered a real gaucho, herding his sheep with the help of his two best friends, a couple of dogs! The bus had to stop because the sheep were strewn all over the road running in different directions. They had lost their way, if you will. Alas they were recovered safely and we were on our way. 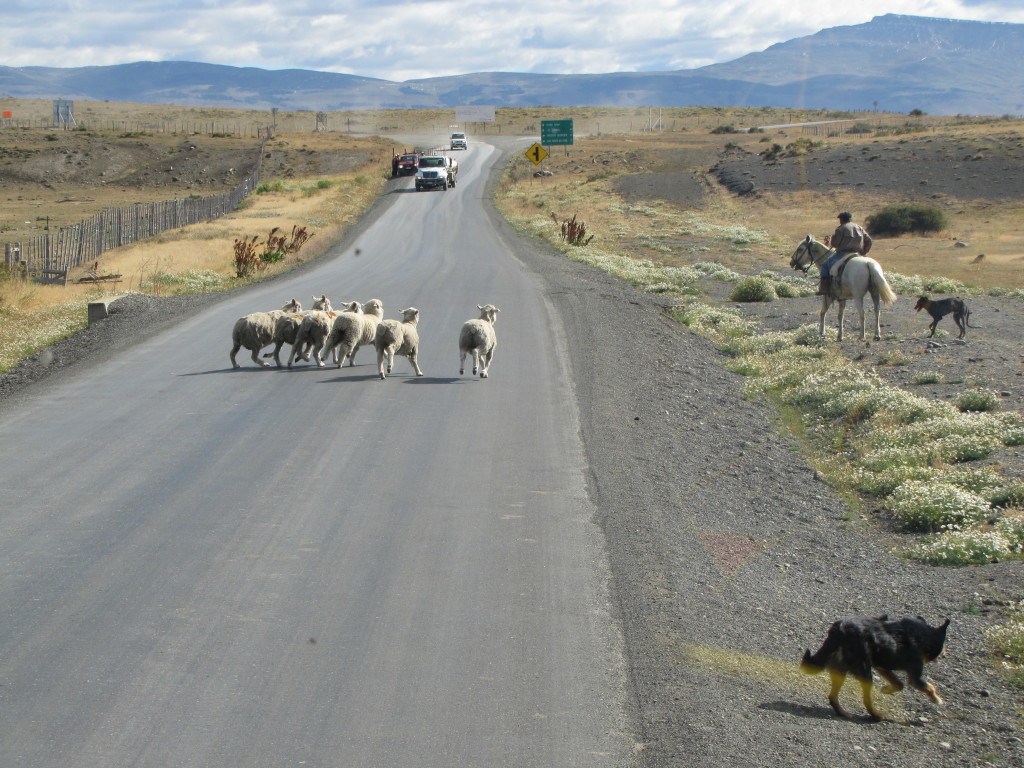 A little while later we saw the famous Andean Condor. It is basically a large black vulture with white patches and can have a maximum wingspan of over 3 meters! It was incredible to see them just soaring above us. 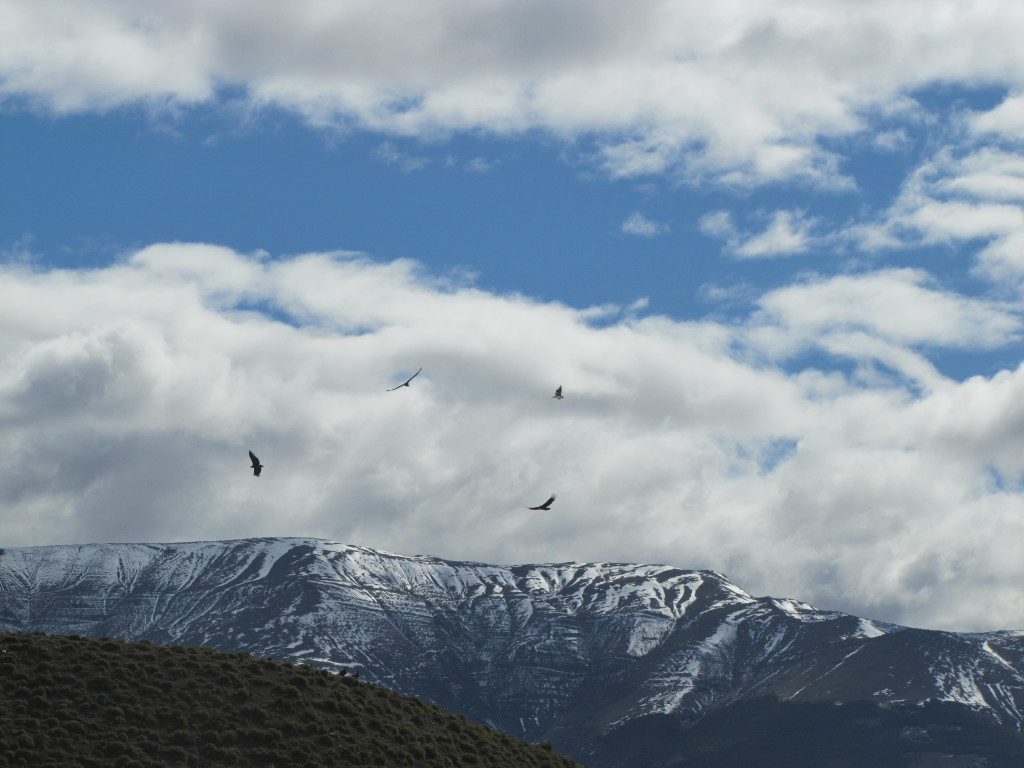 Another interesting animal that was plentiful in the area is the Guanaco, a type of llama native to South America. We were able to catch them from the bus almost the whole way there. The scenery on the way to the park was stunning. 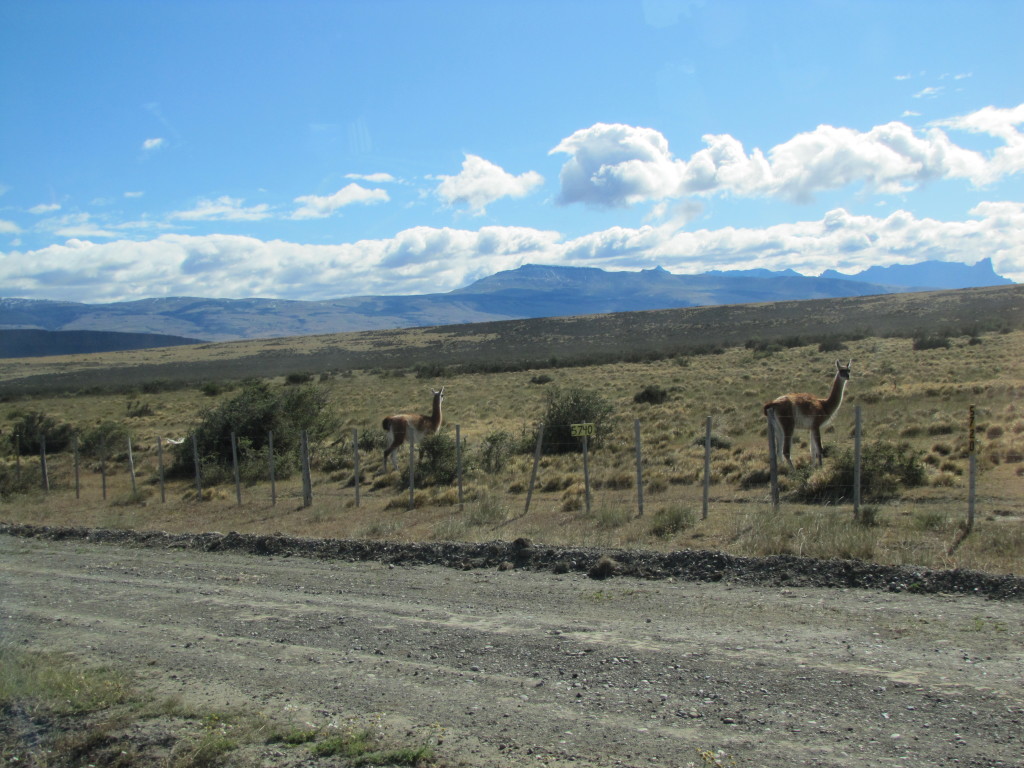 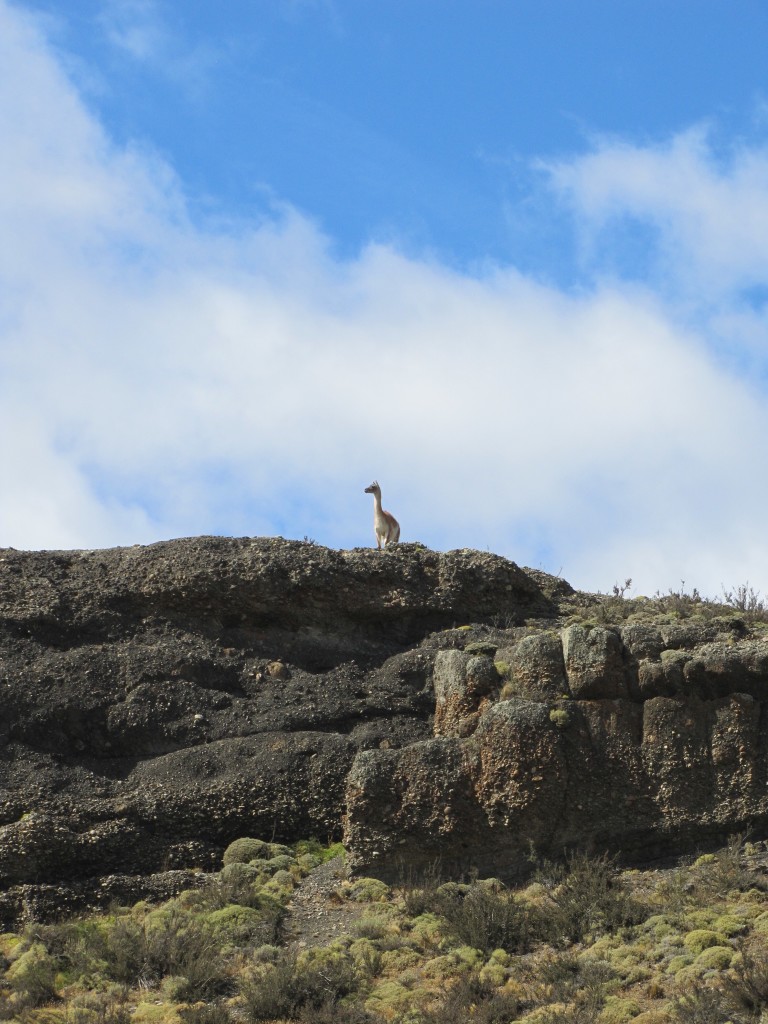 Guanaco on the lookout 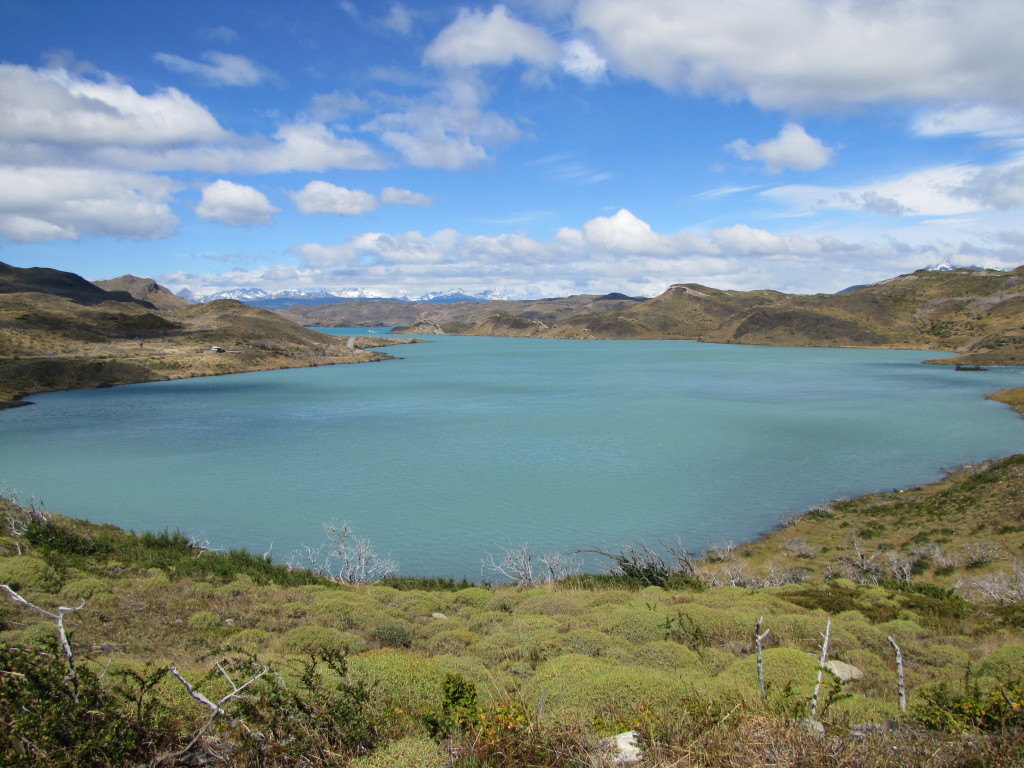 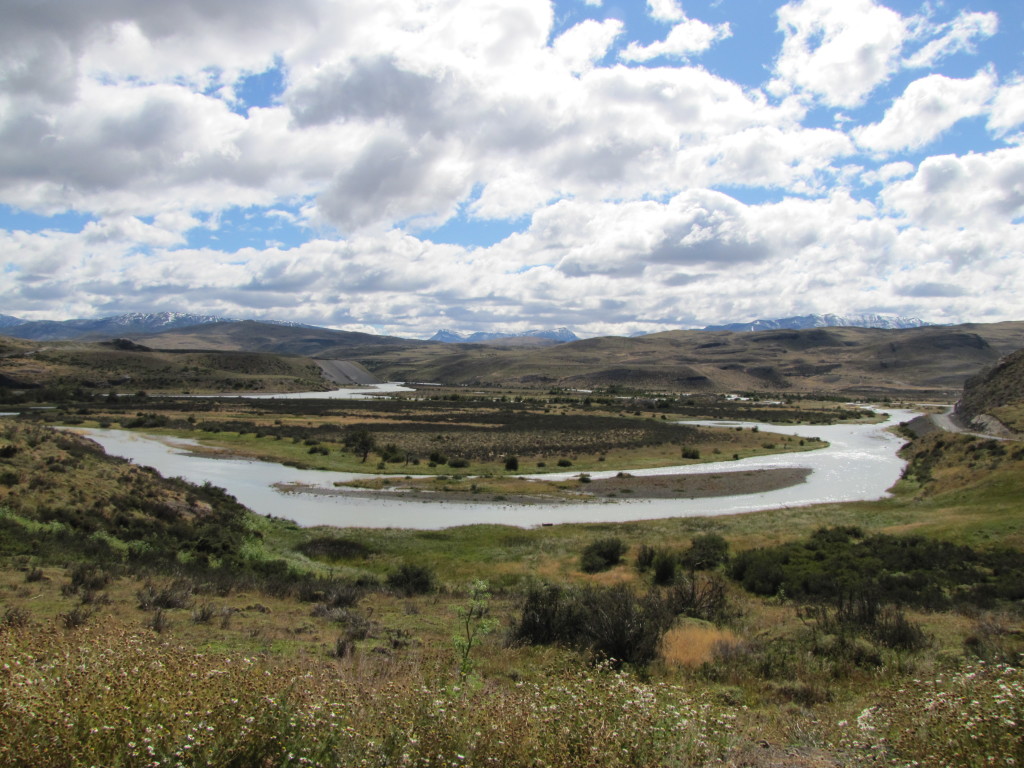 After gaining entry into the park and driving for a bit, we could finally see the famous Torres del Paine (blue towers). They are granite peaks that are approx 2,500 meters above sea level. They were partially covered by clouds at first, but later in the day revealed themselves.

As we continued along the tour, there were many stops to see the beautiful lakes, glaciers, and waterfalls along with the different angles of the mountain range. The weather permitted us to take some great pictures that day. We some how keep getting lucky with the weather! 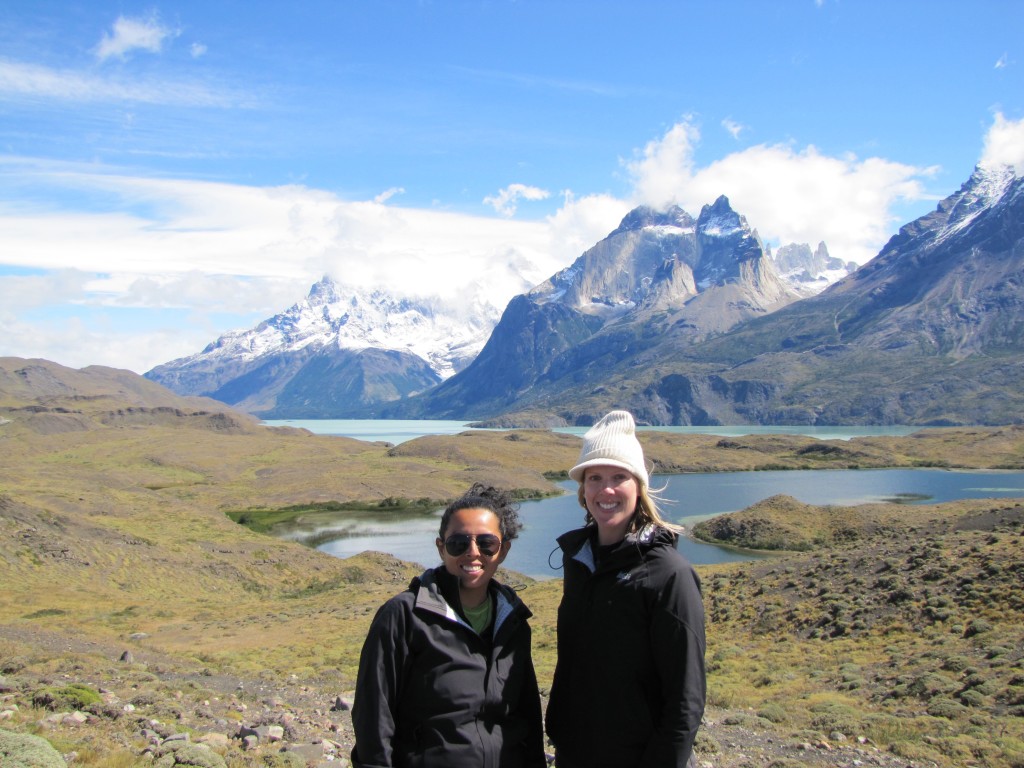 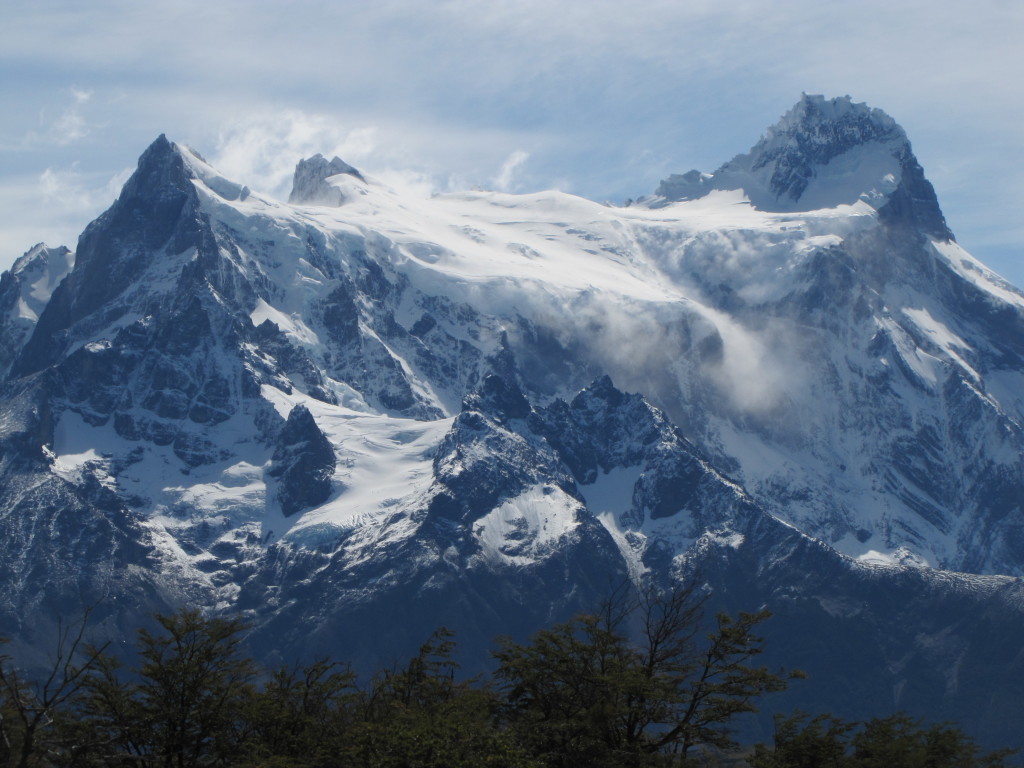 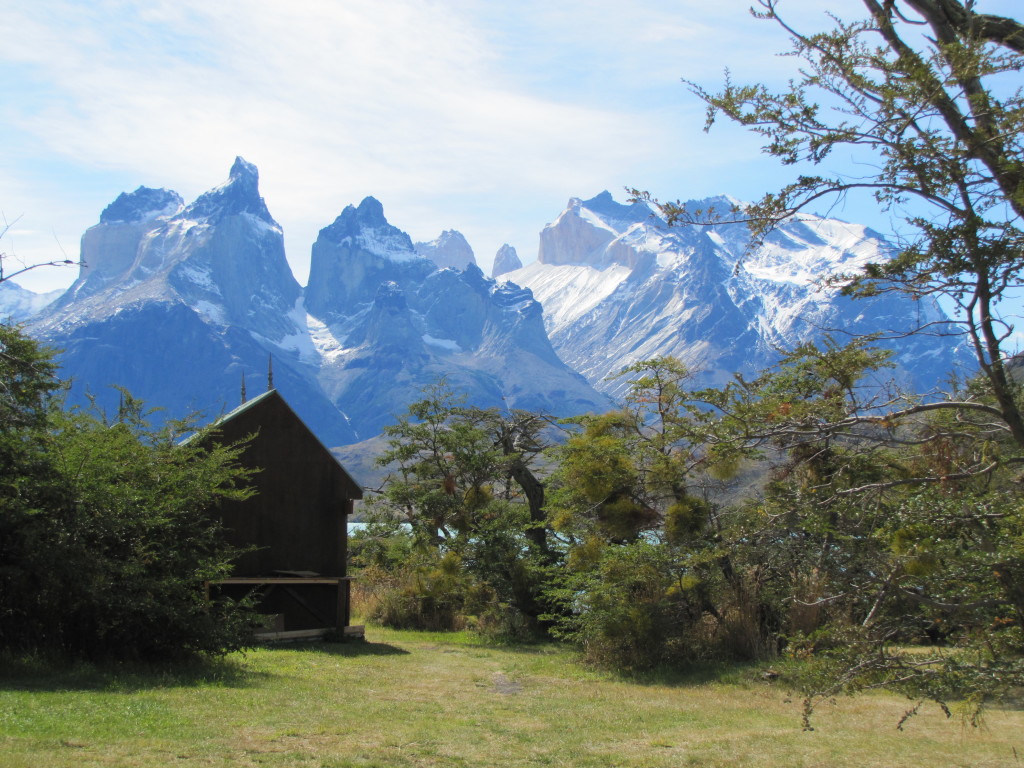 We stopped here to eat our lunch we packed with us 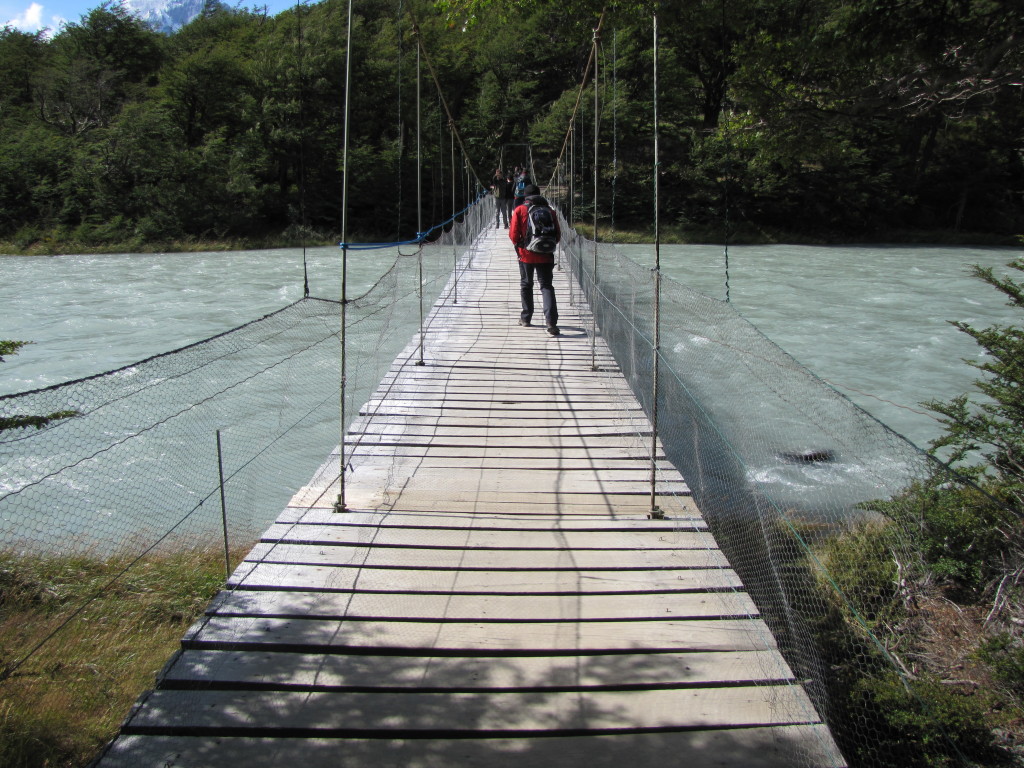 Suspension bridge on the way to Grey glaciar 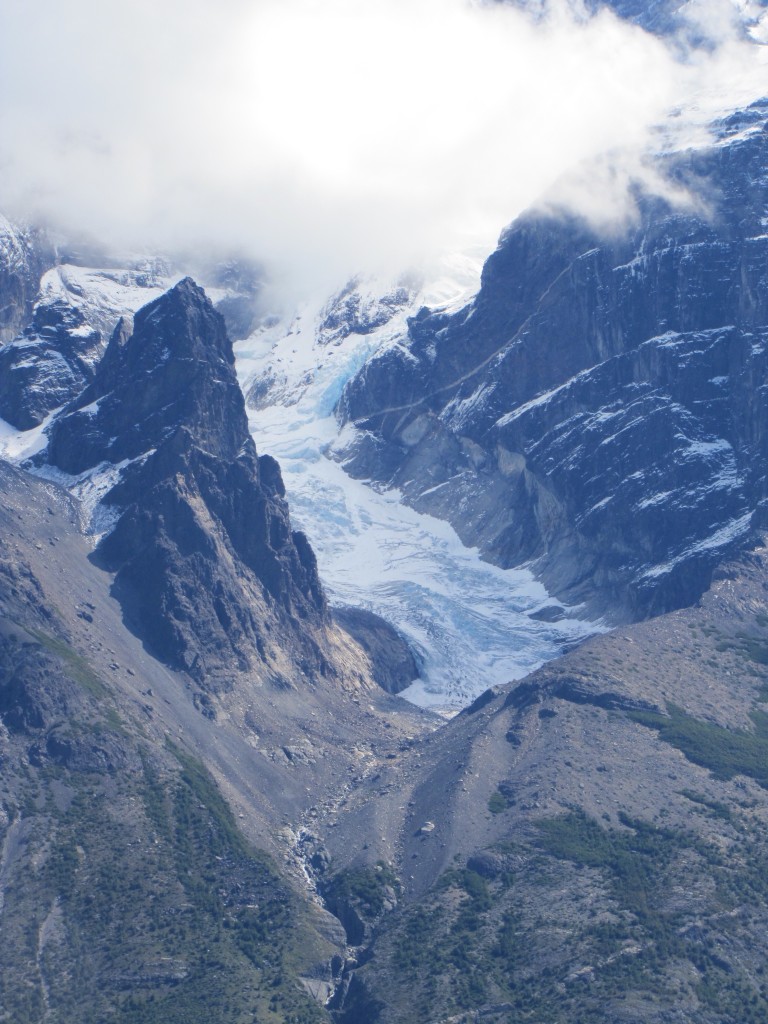 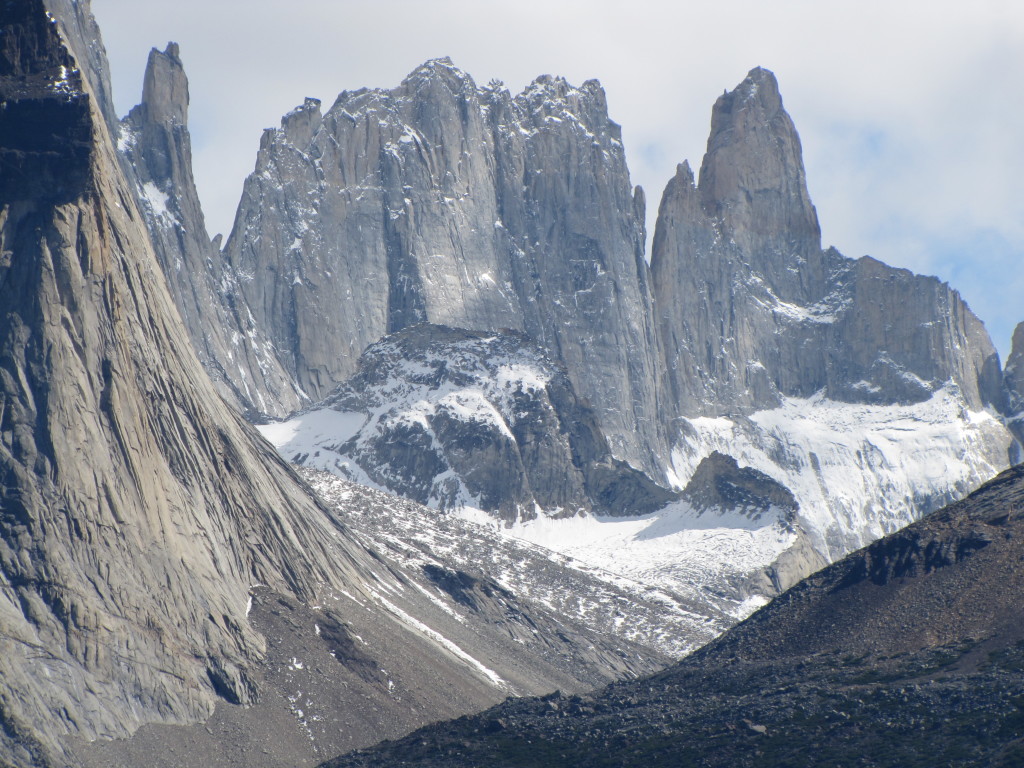 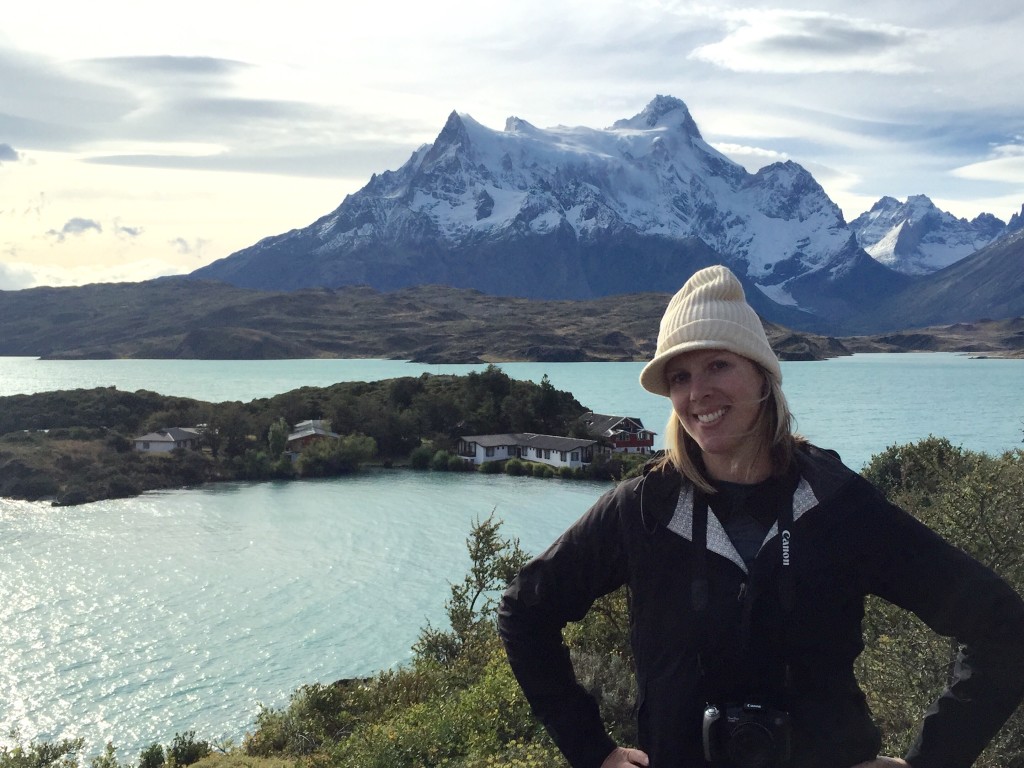 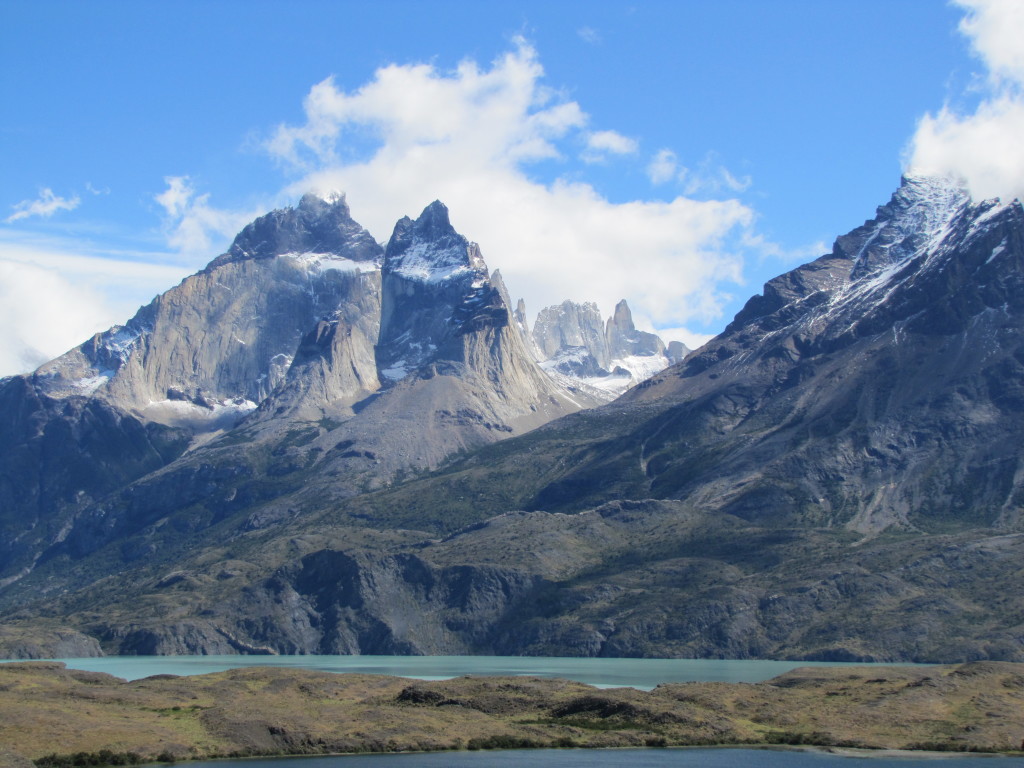 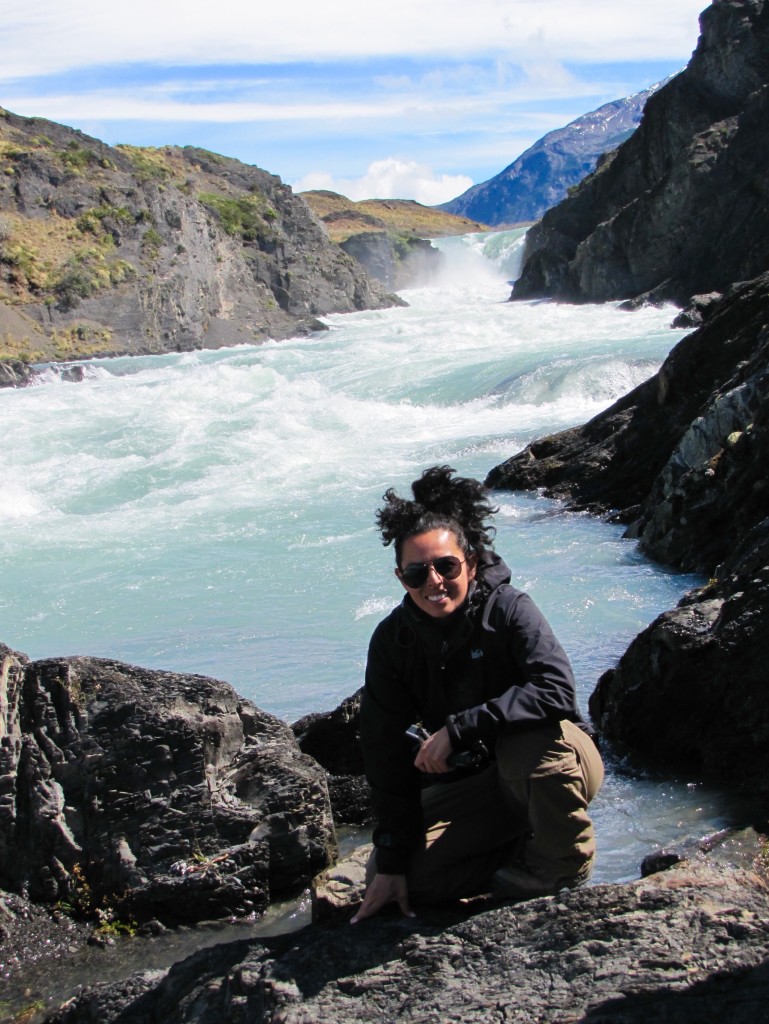 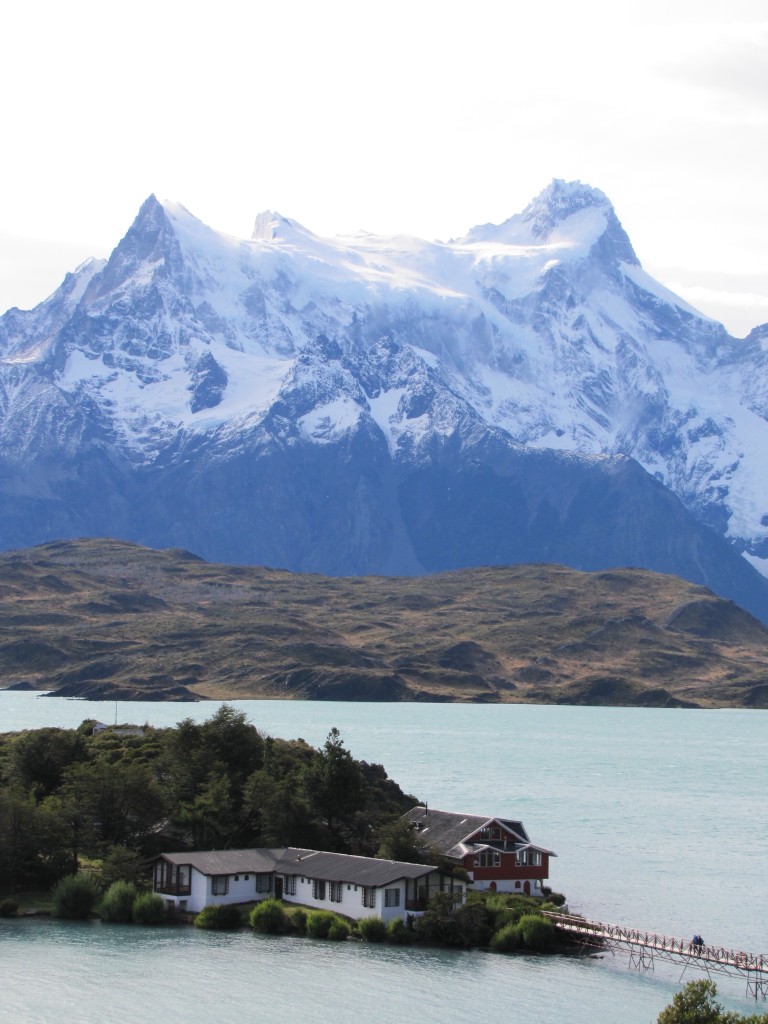 Oldest hotel in the park, Hostería Pehoé, dating back to 1959

Even though we didn’t have time to challenge ourselves with a grueling trek of any sort, we were still able to capture the essence of this grand national park. We would love to return to do the popular 4-5 day “W” trek through the park.

We said goodbye to the town of Puerto Natales, took a bus ride to Punta Arenas where we slept over night at the airport (which, with so many people sleeping in their sleeping bags looked like a hostel by the way). We had an early flight the next morning to Santiago. From there, our friends picked us up and took us to their home just outside of Santiago, Chile, a place where we could hang out and relax for a little while… 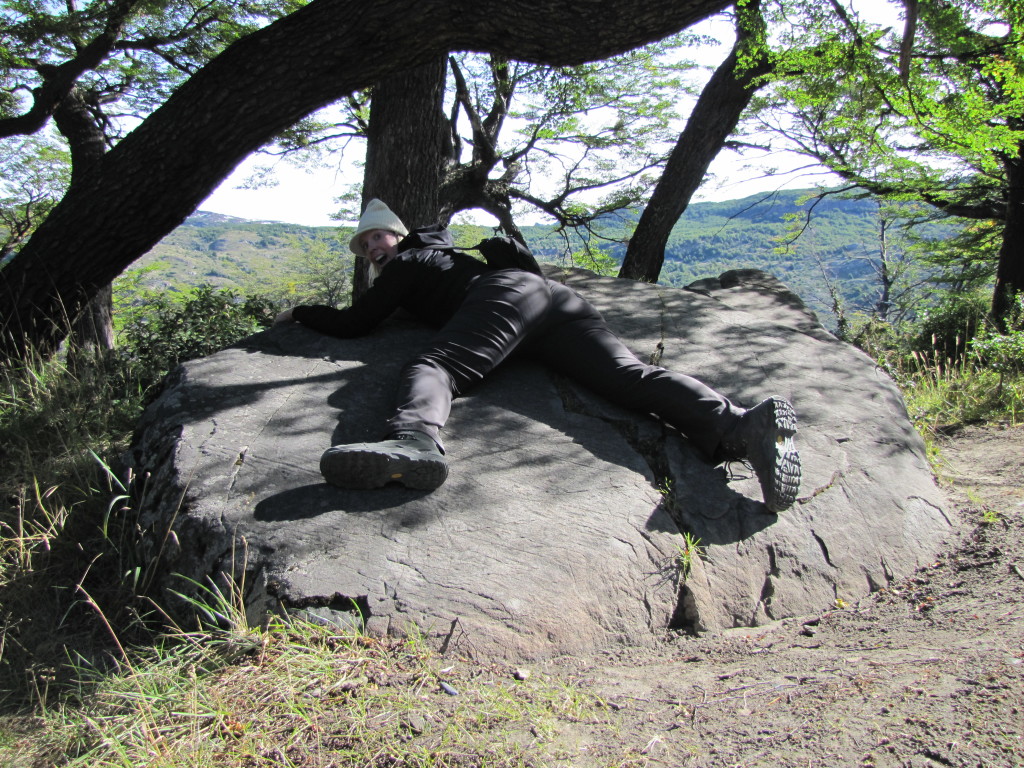